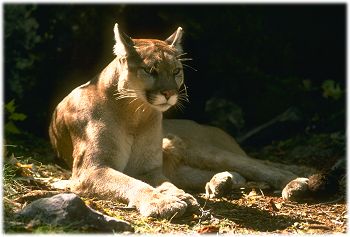 Mountain lions (also known as pumas, cougars, or panthers) are native to California's San Francisco Bay area and live in District parklands and adjacent open spaces but are rarely seen because they generally avoid and retreat from human contact. Mountain lion attacks on humans are very rare but may cause widespread interest and concern because they are widely publicized. There is no record of a mountain lion ever having attacked a person in Contra Costa or Alameda Counties.

Learn to recognize this large cat. It is tawny-colored with black-tipped ears and tail. Adult males may be more than 8 feet long, from nose to end of tail, and generally weigh between 130 and 150 pounds. Adult females can be 7 feet long and weigh between 65 and 90 pounds. Mountain lions have long, thick, furry tails, in contrast to much smaller bobcats which have stubby tails and tufted ears.

Mountain lions are very powerful and normally prey upon large animals, such as deer, bighorn sheep, elk, and goats. It is fair to say that they are present anywhere wild populations of such prey are found.

While using the trails, keep children and pets close to you. Be alert below ledges or steep slopes. Hiking or riding with a friend, rather than alone, will reduce your overall safety risk on the trails.

If you encounter a mountain lion at close range:

If you are involved in a face-to-face encounter with, or an attack by, a mountain lion anywhere in California, contact the California Department of Fish and Wildlife's 24-hour dispatch center at 916.445.0045. If the encounter took place within the District, contact the District's 24-hour dispatch center at 510.881.1833. In an emergency in the East Bay Regional Park District, call 911 (call 510.881.1121 from a cell phone) 24 hours a day.

Related Links on this Web Site

This Web site is the property and responsibility of members of the Volunteer Trail Safety Patrol. This Web site is not officially supported by the East Bay Regional Park District.